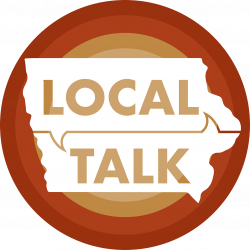 Local Talk for Friday, August 12, 2022 started with a weekly installment by Dennis Hart concerning the news from the pages of the Ames Tribune last week.

Susan Gwiasda, Public Information Officer for the City of Ames and Merry Rankin, Sustainability Director for the City, discussed recent Rummage Rampage. Two volunteers were featured Scott Rabe and Valentine Chenou contributed mightily to the event.  More than 70 tons of repurposed house-goods were diverted away from the landfill.

And Dean Henry, Berry Patch Farm, South of Nevada discussed his 57 year business formula of success at “pick your own” fruit.  Dean provided a delightful tour of his BerryPatchFarm.com.  The full hour long interview can be heard hear for your enjoyment.

Music was provided by Rose Griffin from her cd Cowboys and Angels we heard “Learn How to Fly and The Road.”.