Disabilities are something that everyone can experience in their life, in their lifetime. I Am Able IOWA presents issues, stories, and information about disabilities, as told through personal experience and through the voices of people and organizations who serve to assist people with disabilities. Program topics can range from: the law, support that is available, disability etiquette, service animals, accessibility issues, specific disabilities, mental health, to name only a few of the many areas of our lives touched by disability. Interviews on this show facilitate learning, engaging, and connecting with listeners.

During the first show, Daniel made a powerful statement that he understood why we were doing the show – so that he, who was diagnosed as autistic at an early age, and that his family were not alone in their journey – and that has been a theme that has tied all of the programs together.

I Am Able IOWA is a radio program produced by the Iowa Able Foundation/Able Up IOWA. 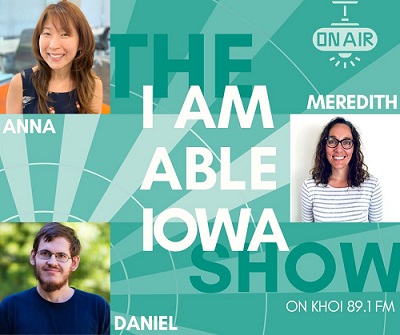 Anna Magnusson/Co-host, Producer, and Engineer: I Am Able IOWA

About Daniel Heddendorf/Co-host:Daniel Heddendorf is a writer, actor, and radio host. He was a former D/J. at 88.5 KURE, studied at the Iowa State University. He has said about the show: “It’s not about starting a conversation, but expanding on it. Asking questions, clearing up misconceptions, realizing where we can improve in terms of our own behavior. If those who tune in do the same, the show has the potential to improve everyone’s lives.”

About Meredith Francom/Co-host: Meredith is passionate about making connections and storytelling. She has lived a nomadic lifestyle--never staying in one place for very long. She hates answering the question, "Where are you from?" Instead, she prefers to bloom where she's planted.  She serves as the Masters Marketing and Alumni Relations Coordinator at Iowa State University –Ivy College of Business