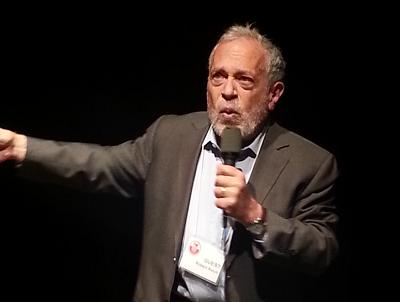 Robert Reich, former Secretary of Labor under Bill Clinton, delivered the keynote address at the Working Families Summit in Ames, May 16, 2015. The event was sponsored by the AFL-CIO, AFSCME, ISEA, and other unions, together with the NAACP, League of United Latin American Citizens (LULAC), Center for Worker Justice, Progress Iowa, Iowa Citizens Action Network, Iowa Alliance for Retired Americans and other progressive groups. KHOI thanks these sponsors for permission to air and post this lecture.

In addition to serving as Secretary of Labor from 1993 to 1997, Robert Reich taught at Harvard and Brandeis Universities, and is currently the Chancellor's Professor of Public Policy at University of California, Berkeley. He has also been a contributing editor of The New Republic, The American Prospect (also chairman and founding editor), Harvard Business Review, The Atlantic, The New York Times, and The Wall Street Journal. He directed the award-winning documentary, Inequality for All (2013), which won an award at the Sundance Film Festival. In this rousing and often amusing speech, Reich exposes the structural changes inflicted upon the American workforce, and encourages summit-goers to ask all the candidates hard-hitting questions about these changes. Most importantly, he asks the listener to overcome the barriers of cynicism and resentment that have been instilled in the voting public and are standing in the way of a widespread progressive movement.