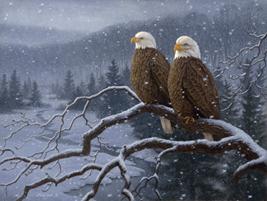 This beautiful framed print on art canvas: "Evening Snowfall - Decorah Eagles", by Iowa Artist Larry Zach will be given to you as a thank you gift to the next donor contributing $1,000 or more to KHOI operations.

Wildlife artist Larry Zach talked about the eagles he painted, as well as his craft as a painter, with Ursula Ruedenberg and Pat Schlarbaum, KHOI naturalist reporter and bird and wildlife expert. Pat also described various large birds (raptors) that live among us and explained some of their behaviors. Finally, Doug Harr, from the Iowa Audubon Society, described the upcoming Christmas Bird Count: what it is, and how to get involved.