KHOI community radio has officially received its 'Notice to Proceed' with the building process necessary for going on the air.  This is authorization was received from American Tower Company, from whom KHOI is leasing tower space near Story City. It authorizes KHOI to take the steps necessary to install its broadcast equipment.

KHOI poured the concrete foundations for the station’s transmitter shelter poured on July 16. On July 20, the transmitter shelter will be moved by crane to the tower site for installation. Broadcast equipment will be put in place shortly afterwards. All this is preparation for beginning to broadcast at 89.1 FM no later than August 17th.

The installation of the tower broadcast site, which includes transmitter shelter, transmitter, antenna, connecting cables and installation costs is valued at $60,000. The funds were provided entirely by Story County Community Foundation
and many individuals in the Story County area.

KHOI chief engineer Paul Nelson said: "It's been a long complicated road, but now it's all coming together very quickly.  Even though now it's about the technology, the final goal will result in connecting people and community."

Essential broadcast equipment for bringing KHOI to the air was ordered this week and is on its way to Story County. (First pieces arrived June7!)

The next step in the building process is to pour a concrete foundation at the broadcast tower site. After it dries, the shelter for housing the transmitter at the foot of the tower will be installed.

Here is a photograph of the antenna that has been ordered and will be installed on the tower for broadcasting the KHOI signal.

Photograpahs of the rest of the equipment

Arnie Arnesen, "Ms.Polical Chowder"and "Dr. Politics" Steffen Schmidt faced off on the hot topics of the day at a fundraiser held for KHOI on May 1 at the Ames Society for the arts. Approximatley 130 KHOI supporters came out for dinner and discussion. Schmidt and Arnesen agreed, by popular demand, to air a program to be broadcast simultaneously on KHOI and WNHN - Arnesen's station in Concord, New Hampshire - that will feature their political commentary and dialogue, similar to "Politics Day," their former program on Iowa Public Radio. To date, $8,650.00 were raised. Some additional funds are coming in the mail as a result of the fund raiser. We hope the letters keep coming as we approach our $10,000 goal for this event!

In an interview with the Ames Tribune, Arnesen spoke about the value of community radio to our local area: "A Community radio... is a place where you can pull more ideas out and...the difference is we have the time..."

Listen to recordings from the presentations on May 1

Celebrate May Day with two of your favorite political pundits! Arnie Arnesen and “Dr. Politics” Steffen Schmidt will be together again at a benefit for KHOI community radio. The dynamic team hosted Iowa Public Radio's former  "Politics Day," which was a weekly edition of "Talk of Iowa." They continue to contribute commentary to Iowa Public Radio.

Arnesen and Schmidt are reuniting for an evening of fun, food, and food for thought  - to help wrap up the capital campaign for building KHOI by the August 7 deadline.

The evening begins at 5:30 pm with a light supper of British pub foods and beverages, including beer and wine. At 6:30 Arnesen and Schmidt take to the mikes to share their views on the news of the day and political amusements. Admission is $15, but Arnie says, “Bring your checkbook or credit card!”. KHOI is a non-commercial radio station, and all contributions are tax deductible.

In preparation for GOING ON THE AIR ON AUGUST 7th a recording facility has been installed at the Ames Pantorium. The oak desk has been provided by the Ames Historical Society. KHOI will go on the air with as many local voices as possible - including yours! Do you have a story or information we can record? Can we interview you? Do you have an interview you would like to conduct and record, yourself?

Be part of KHOI's inaugural sound. Schedule a session at 292-2878 or khoiradio@gmail.com. Someone is here at the Pantorium to help you or interview you Tuesdays - Fridays from 1 to3 PM and Monday - Tuesdays from 7 to 9 PM. 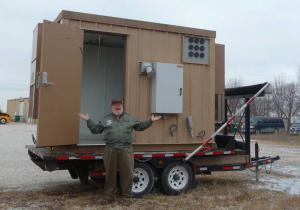 Our deadline for getting KHOI on the air is August 18 2012. That means that within exactly one half year, we must literally be on the air - you will be hearing the sound of community radio when you turn on the radio and go to 89.1FM!

First, we are addressing the most fundamental equipment for getting on the air: our Radio Transmitter at the base of our transmitting tower (just east of I-35 near Story City).

Tell Me Your Flower Story